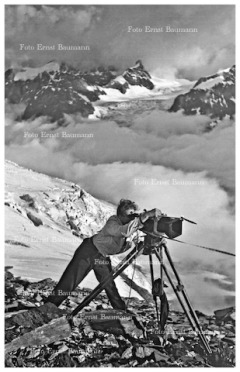 This nickname was given to 2,05 m tall Walter Riml and his cameratripod  by his film collegues.

He worked for more than 100 filmproductions as an actor, photographer, stillphotographer or cameraman together with wellknown and famous stars like Luis Trenker, Leni Riefenstahl,  Christine Kaufmann, Curd Jürgens, Omar Sharif, Steve McQueen, James Lazenby or John Sturges. But until today only a few filmenthusiasts know Walter Rimls name and his great filmcareer.

His career starts in the twenties. The German mountainfilm pioneer Dr. Arnold Fanck engaged him as a skier and grip for the film "The Big Leap“ (Der große Sprung/1926/27). Afterwards he was engaged as an actor for the films "The White Ecstasy" (Der weiße Rausch), "SOS Iceberg" (SOS Eisberg) or "Adventure in the Engadin“ (Abenteuer im Engadin). That was the beginning of a long life working for film with all his creative power.

Read more interesting details of his life on ... ABOUT WALTER

If not indicated otherwise all photographs by Walter Riml. Other photos and film documents are from our WaRis-Tiroler Filmarchiv.