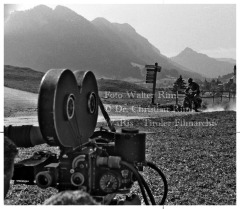 In 1962 Walter Riml was engaged as the chief of the 2nd unit camera team. The film was directed and produced by John Sturges. James Clavell wrote the screenplay. The team filmed on locations in the Bavaria Studios Munich, around Munich and on several locations in the Allgaeu (Pfronten, Fuessen, Schwangau, etc.). A lot of very famous stars like Steve McQueen, Richard Attenborough, James Garner, Charles Bronson, James Coburn, Donald Pleasence and Gordon Jackson were engaged.

„The Great Escape“ tells the real story about an escape by allied prisoners of war from the German POW camp "Stalag Luft III" during WW II. Until today fans all around the world are excited about the story, the perfect photography and the brilliant actors.

We´re really happy that we have negatives of the shooting, of Steve McQueen, several documents and the screenplay in Walter Rimls estate. 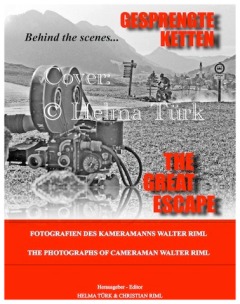 Due to the 50th anniversary of the release of the film „The Great Escape“ we decided to publish some of the private photographs taken by cameraman Walter Riml during the shooting of “The Great Escape” in 1962.  Apart from these photographs, our book also includes several written documents from the film’s production, such as daily plans, accommodation registers of the staff and excerpts from the screenplay, all part of Walter Rimls estate. It also contents personal memories of actors like Lawrence Montaigne and Karl-Otto Alberty.

Written in German and English, we´re sure that our book is very interesting for every fan of the film ´cause it gives a fascinating insight into a “Behind the scenes” look at the film “The Great Escape”.

„Behind the scenes... THE GREAT ESCAPE“

The photographs of cameraman Walter Riml 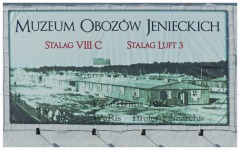 In July 2014 we visited the historical place "Stalag Luft III" in Zagan/Poland. Today the complete areal is a museum. It was a great honnour for us that the director of the museum, Mr. Marek Lazarz showed us the exhibition and told us many, many details about the real escape. Photos of our visit you can find in the photogallery.