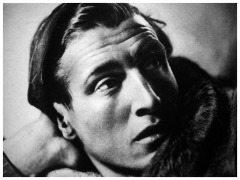 In 1933 Walter Riml was a member of the Universal Greenland-Film expedition. The director was Arnold Fanck. In the film "SOS Iceberg" Walter Riml played the part of the cook Fritz Kümmel. He acted on side of Gibson Gowland, Leni Riefenstahl, Gustav Diessl, pilot Ernst Udet and Sepp Rist.

Beside his work as an actor he made several documentary films of glaciers and about life of the Inuit.

Later on, in 1935, he was again in Greenland for filming. He realized the movie "The big Ice – Alfred Wegener’s Last Journey". The film tells the story about the last expedition of the great polar scientist and glaciologist Alfred Wegener.

The archive of Walter Riml with several ten thousand photos of his work in Greenland was destroyed in Berlin 1944 by an air raid.

In the photo gallery you can see one site of his passport with his handwritten marks of his first Greenland expedition. On the left site you see the permit for Switzerland where he filmed „Adventure in the Engadin“ in 1932.