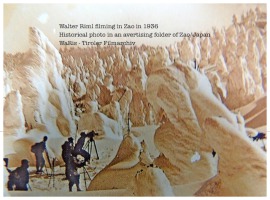 In the mid 30ies Walter Riml and the director Arnold Fanck went to Japan.

The film team received an invitation of the Japanese culture ministry to produce the movie "The daughter of the Samurai". On this occasion Walter Riml also filmed several documentaries and cultural films like "Spring in Japan", "Rice and Wood in the Country of Mikado" or "The Holy Volcano of Japan".

In the book of the ski lodge of the Kobold-Ski club in Japan there is still an entry and drawing of Walter Riml. His drawing shows himself, his camera and his camera-assistant Hannes Staudinger. Walter Riml made this drawing, dating March 1st 1936, while they had a film party with their Japanese friends and film partners.

In the photo gallery you find this drawing and also one page of his passport with Japanese rubber stamps.

He also reported about his camerawork several times in a German film magazine. You can see one of his articles in our gallery.

Walter Riml made also a short film about the ski resort Zao, known worldwide for the famous „Snow Monsters“. Several pictures of the shooting are nowadays published in Zaos touristic brochure.